Locations within this tour

Constructed in 1937 to a design by prominent Melbourne architects Hugh and Arthur Peck, this striking ‘style moderne’ block of ten flats in red brick features was purpose-built as rental accommodation. It has curved walls punctuated with contrasting lines and a flat roof. It represented the latest in European styling. The block also featured a row of garages on the boundary – an indication of sophistication in interwar Burnie. It is now a privately run hostel. 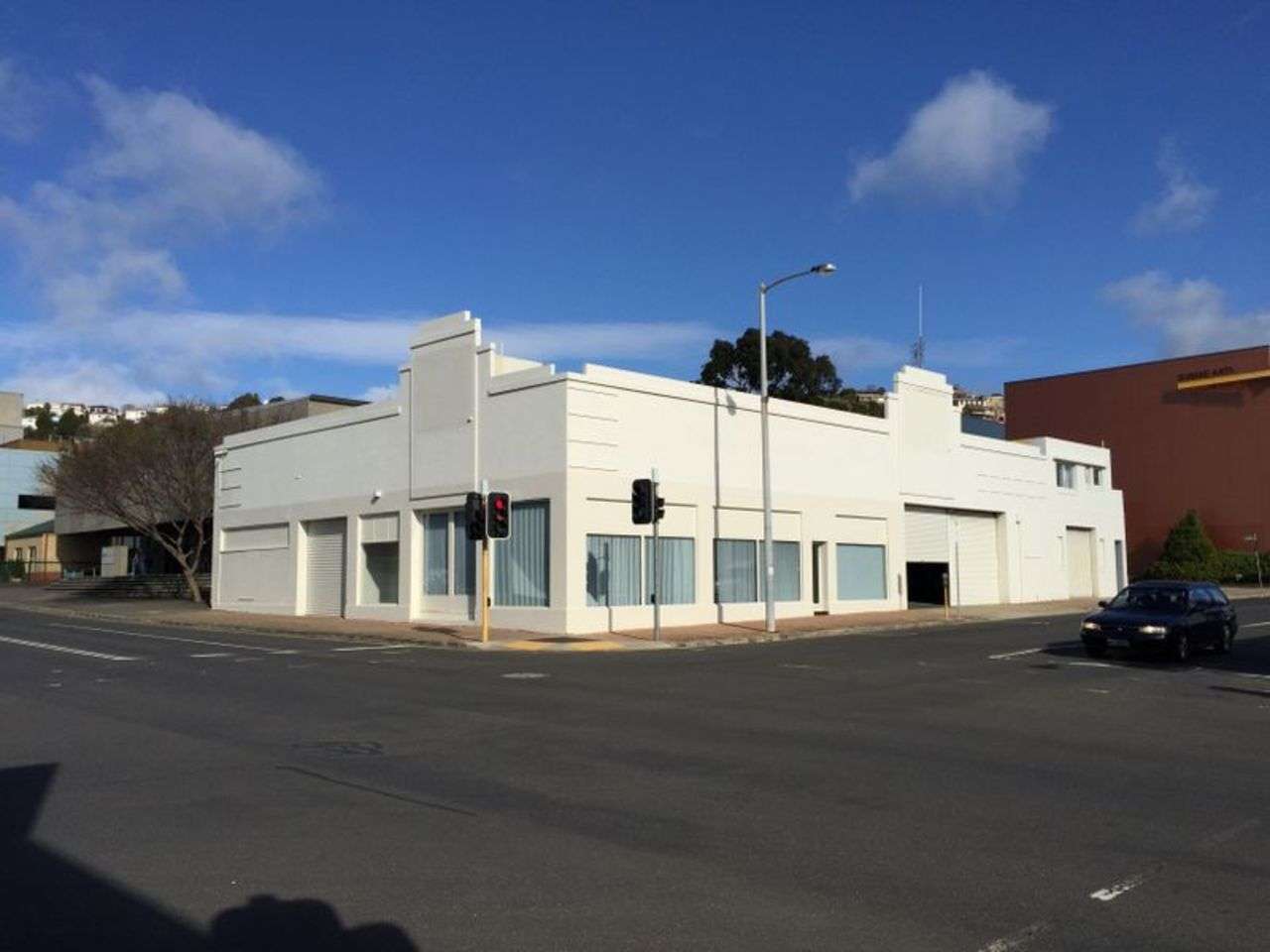 In 1936, Carter & Peace constructed this building for the Dunlop Rubber Co. It later became the showroom for General Motors cars, and accommodation for visiting salesman was added to the rear. A distinctive feature is the pair of squared-off towers. 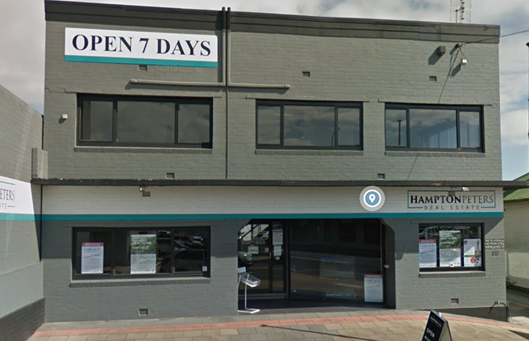 Features of this two-storey commercial/residential building include an exaggerated eyebrow lip and subtle stepping in the window recesses. It was constructed as a private residence by Mr A. P Best (known to all as Abbie, described as a lovable larrikin). The Bests lived upstairs and their daughter, Mrs Rita Hughes, ran a hairdressing salon in the downstairs section. When the Bests eventually moved out, Mrs Hughes and her husband Cecil occupied the upstairs

A blacksmith occupied this site until 1951, when the hotel was constructed for Mrs Tucker, who then ran it for twelve years before selling it to the Tasmanian Brewery. They leased it to licensee Dick Jones and later to Max Green, prominent footballer with the Cooee Football Club.
The hotel was designed by the prominent architects Roy, Smith and Willing from Launceston and was built by the owner’s son, Tom Tucker, who carried out most of the concrete construction on his own in an era before ready-mixed concrete. 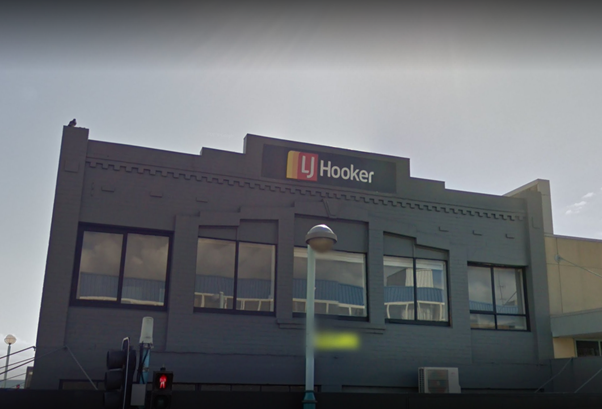 The Lighthouse is a two storey commercial building, characterised by a distinctive stepped window treatment. This is now a real estate agency. 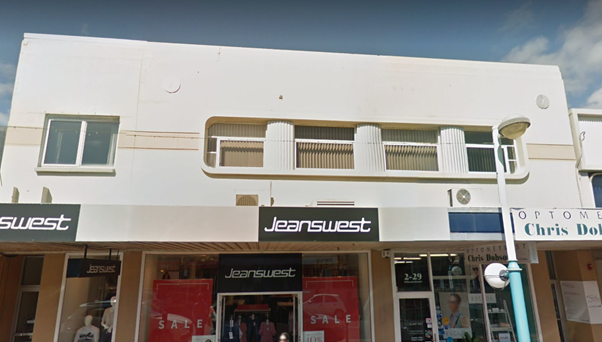 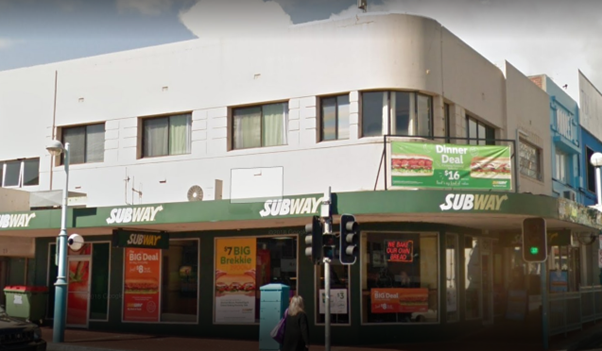 This stylish grouping of shops and offices remain intact on the exterior and illustrate the smooth rounded form of streamlined design. They present a consistent whole as they step up the hill. 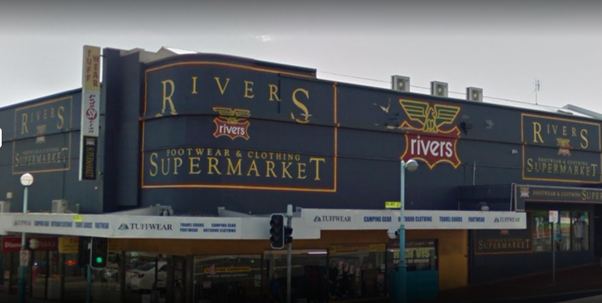 The Maples Furniture chain constructed stores in Moderne style throughout Australia, including this store in 1939. The builders were Carter & Peace and it was reported that the plate glass
windows were the largest ever fitted in Tasmania. It is strikingly similar to Subway, on the opposite corner, and it is likely that they were designed by the same architect. 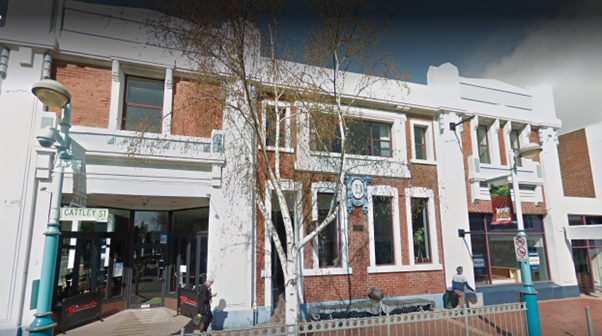 In the early 1920s, this substantial double-storey building on a prominent corner was occupied by the The Union Bank of Australia and later the Launceston Bank for Savings. In 1957 it was modified for use as a store, and again renovated in early 1990s. 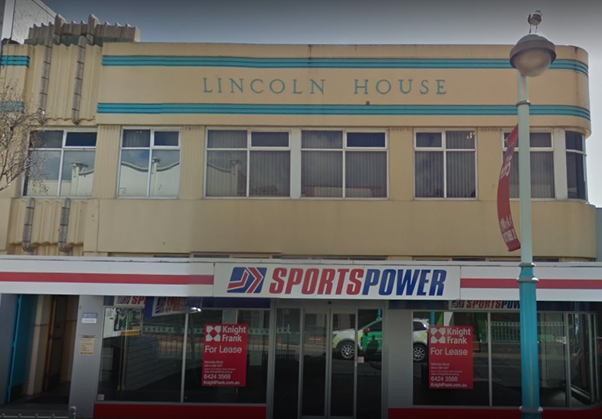 Streamlined design, with vertical fins rising above the roofline at one end, finished in shiny fawn terracotta. On the first floor façade, two sets of speed lines are incised and run along the length of the building. It was designed by the prominent architect A. Lauriston Crisp in
1940, and commissioned by local solicitor Charles Roberts Thomson. The interior office space on the first floor is an intact example of the styling of the era. 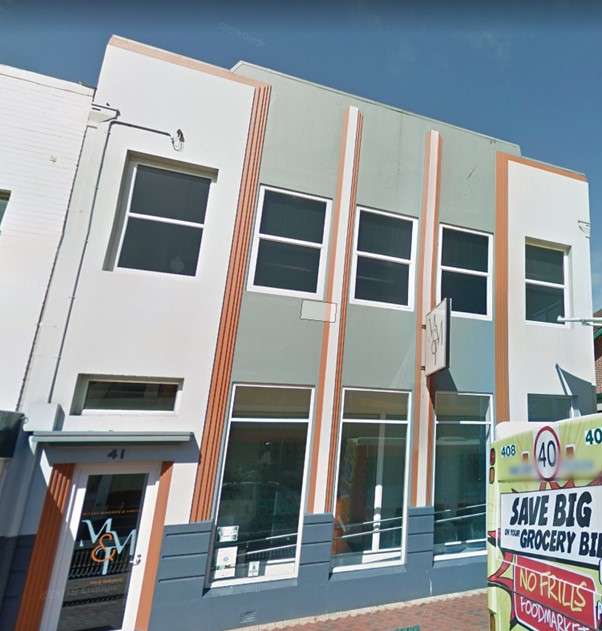 Originally built for Crisp Hudson and Mann Barristers and Solicitors. Entry was through a single door at the left. It was later re-modelled and windows replaced by a new doorway. The different levels on the façade are accentuated by a contrasting paint scheme. At one stage this building housed a dance hall and lending library. 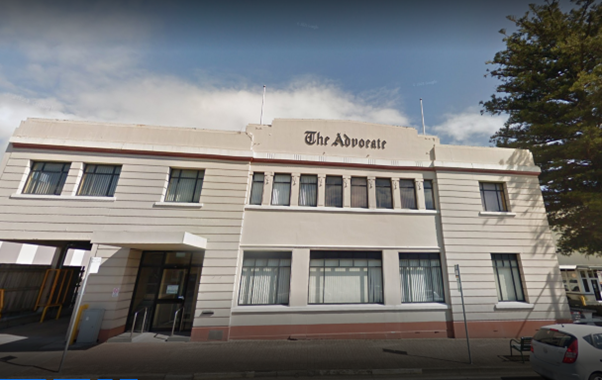 Following the destruction by fire of the original Advocate building, the two-storey symmetrical building was purpose-built for newspaper production in early 1920s. Further additions were made in 1950 under the direction of the architect Albert Freak from Devonport. The large entrance was replaced with a series of small windows and a smaller entrance, which in turn has been re-located. 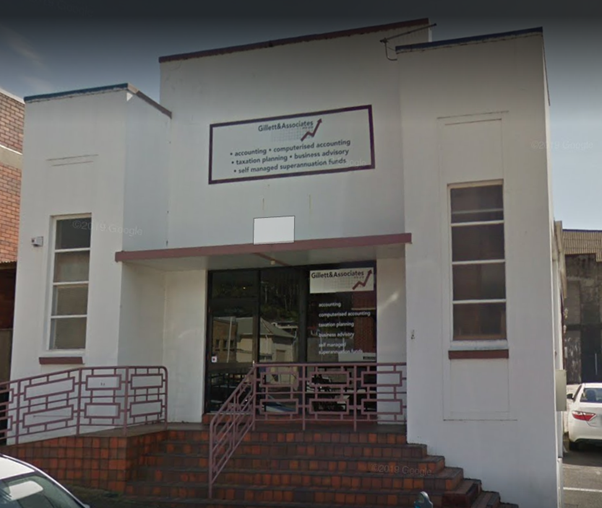 Large two-storey commercial building which wraps around the corner and includes a lip over
the doors and windows.

Constructed in 1946, the former Burnie Technical School was one of a number of outstanding designs by the main architect from Tasmania’s Public Works Dept., Sydney Blythe. During construction, human remains were disturbed and bones removed, and it was later realized that it was on the site of one of Burnie’s original graveyards. In 1959, a motor mechanic workshop was erected by Stubbs Construction linking the adjacent saw-tooth roof . The building was saved from demolition for a shopping complex in 2008 and is now a listed on the Tasmanian heritage register.
Building at 1-3 Spring St. 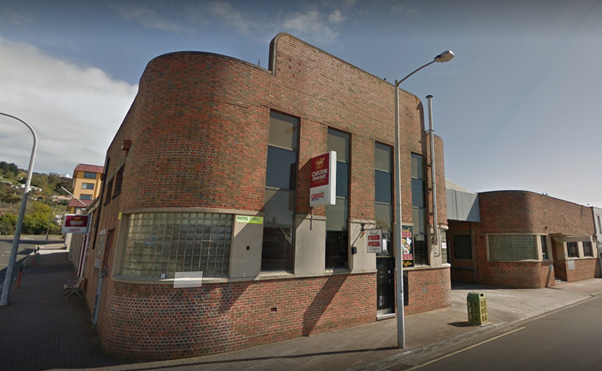 The building was constructed by M M Smith from South Burnie in as a butter factory for the Northwest Co-operative Dairy Co. Note the rounded building edges, extended vertical windows and extensive use of glass bricks – the latest styling at the time. Changes were made in 1956 and the building is currently used as a food and beverage venue. 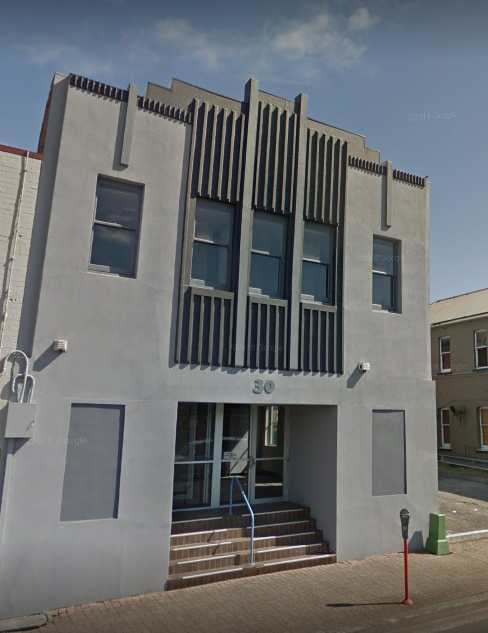 The building began life in 1938 as the Vogue Theatre, constructed by Len Frith – in competition with the Star Theatre in Mount Street. It was updated in 1941 and closed in the 1960s and was then used as the Police Citizens Boys Club. 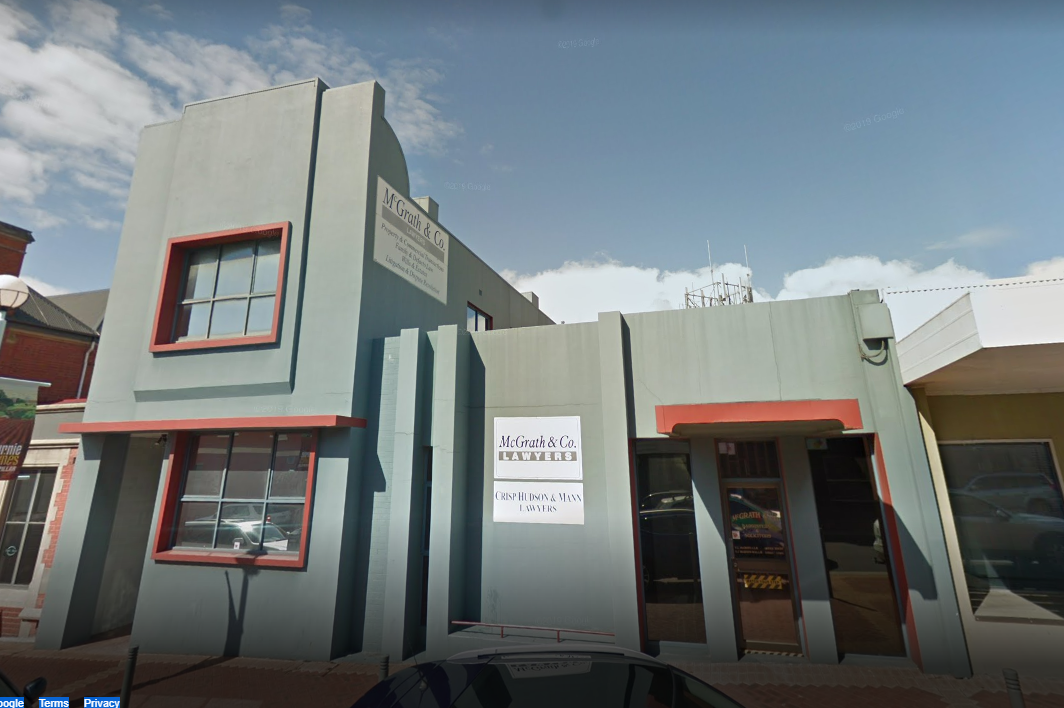 Constructed by Herbert Woods in the 1880’s, it was originally Fairthorne’s chemist shop. It remained as a pharmacy for many years until occupied by Dr. John McGrath as a surgery. It was totally re-modelled in Art Deco style and further modified in 1957 under direction of architects Kemsley & Co., who practiced in Melbourne & Launceston. It now houses the legal practice of McGrath & Co.

Art Deco, known also as Style Moderne, had its genesis in the exposition Internationale des Arts Decoratifs et Industrial Modernes held in Paris in 1925, where the style was first exhibited. The style features sleek lines, geometric and symmetrical repetition of ornamentation.

Burnie was fortunate to have the services of a number of high-quality building firms during the interwar period. The most prominent was Carter & Peace who operated from the 1920s to the 1970s, occupying a site in Wilson St. next to the Beach Hotel. They built many of the prominent commercial buildings in the CBD and many local houses. The firm had also built the original Burnie own Hall in Cattley St. Tom Carter’s son recalled that its demolition in 1976 caused his father much distress as he watched on. The construction premises used by the firm (including a sawmill, joinery and building yard) is now occupied by Toyworld. Numerous local builders served their apprenticeship with the company, including Lou Stubbs who went on to establish Stubbs Construction. Local builders Aubrey Keane, Pat Streets, Les Clark, Roy Preece and John Vincent were also apprentices of Carter & Peace in the 1930s.

In other parts of Australia, builders also designed many buildings. Whilst this may have occurred in Burnie, many local interwar buildings were designed by prominent architects, from Tasmania and the mainland. Hobart-born Colin Philp is regarded as “one of the entrepreneurial leaders of Modernism in Tasmania”. He designed the original Wrest Point Hotel in Hobart and a number of buildings in Launceston, whilst in Burnie he was responsible for a large house in Wilson St. (Arden), and a number of commercial premises.

As the key architect for the Tasmanian government, Sidney W T Blythe designed a series of impressive schools throughout Tasmania, including the Burnie Technical School. Now known as Portside,
it was designed in 1941 but WWII delayed its construction until 1946.

Roy Smith & Willing worked on the Beach Hotel. Later a number of commissions were undertaken by Melbourne firms, such as the leading modernists, Seabrook & Fildes, who updated the interior and sections of the exterior of the Beach Hotel. As is
often the way with hotels, a later upgrade of the premises in 1960 removed much of the previous design.

Information in this walk is taken in part from the Burnie Art Deco Walk brochure. Burnie City Council.

Tas Living History is an initiative of Business Northwest, a division of the Burnie Chamber of Commerce. We work with the local museums, historical societies, and interested volunteers to produce the content on this site.  We acknowledge and pay deep respect to the Traditional Owners of the lands upon which we conduct our business, pataway (Burnie), paythinwutik (Wynyard-Fossil Bluff).  We acknowledge and pay our respects to the leaders, past, present and future.